The progress that we have achieved so far in almost all aspects of human life is mostly owed to technology. Hundreds upon hundreds of inventions make our lives a lot easier than before, allowing us to do things faster and more effectively. But the real jaw-dropping achievements are born when technology pairs with medicine.

Scientists have finally come up with a way to allow locked-in patients to communicate with people in their environment. In case anyone is wondering what “locked-in” means, it is the condition in which the patient cannot move any part of his/her body, including the eyes. 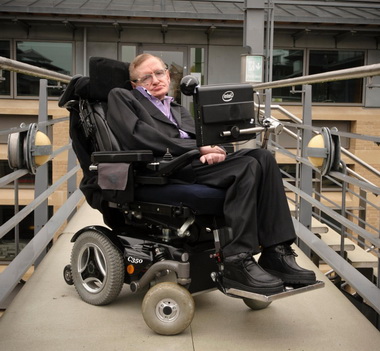 It is something rather common for patients suffering from amyotrophic lateral sclerosis (ALS), a condition made very famous by Stephen Hawking (in the photo), the great astrophysicist who suffers from it.

So far, scientists' efforts were focused on measuring the electrical activity of the patient’s brain and trying to interpret these changes and convert them to signals and expressions that we can understand. However, this was not successful due to the fact that some of this activity is produced by tiny involuntary eye movements that even ALS patients have.

The new method tries to measure the oxygen levels of the blood located in the brain instead of the electrical signals described in the previous paragraph. Since the active parts of our brain consume more oxygen than the ones that are not used at a given time, the computers designed to process this data have managed to detect certain patterns in the fluctuation of oxygen.

This new invention has already been tested on 4 patients suffering from ALS, 3 of which were unable to communicate at all for the past 3 years, while the fourth one lost the ability in 2015. The results were amazing since the computer managed to receive and interpret their responses (in the form of yes-no answers) in more than 70% of the times. All of the four patients managed to keep communicating with their families for a few months, something that had never been achieved until now.

It’s obvious that it is still a very “immature” invention that has a lot of potential and also big improvement margins, but every single thing begins with a very small step. The ‘yes-no’ answers that these patients are finally able to give are a huge leap forward and, even though it is limited, it is a way for them to communicate with their surroundings, at least on a basic level.